Even though e-mobility is considered the propulsion of the future, combustion engines will remain the technological reality for a long time. Why industry and the University of Technology Graz will keep intensively researching large engines for a long time.

“It is good that politics are now facilitating the breakthrough of the electric car!”, says Theodor Sams, Head of Research and Development, Powertrain Engineering at AVL List GmbH Graz, adding, “In urban spaces electromobility is very practical.”

However, even though e-mobility is currently much, electrically powered engines are not a universal solution, a fact that is emphasized by the platform of top-level researchers at the Graz University of Technology (TU Graz) and industry partners.

According to Andreas Wimmer, CEO of the Large Engines Competence Center (LEC), Austria’s leading research facility for combustion technologies for large engines, one of the main reasons why research on combustion engines needs to remain on full speed, is because electric propulsion will not be realizable for maritime use on the foreseeable future. Another reason: By 2021 the wants to implement new ambitious emission standards for passenger cars. And the University of Technology Graz is one of the worldwide leaders in emission research, as emphasized unanimously by its Vice Rector Horst Bischof and Helmut Eichlseder, leader of the Institute of Combustion Engines and Thermodynamics (IVT) at the TU Graz.

Although combustion engine emissions will not be at zero percent by 2021, but they have the potential to achieve this in the foreseeable future, as explained by Eichlseder and Sams. Until the year 2030 between 70 and 90 percent of all vehicles will need a combustion engine.

Because of the worldwide rise in mobility and the correlating increase in combustion engines experts expect the transition to e-mobility to take at least 20 years. Therefore, there will be discrepancies regionally, as well as between urban and rural areas. But also globally, given that, according to Eichlseder, infrastructural prerequisites are missing in order to make it suitable to be applied on a large-scale. For long-distance trucks, agricultural machinery, construction machinery, non-electric railway traffic, and for small engines the combustion engine will remain the method of choice.

Ultimately, LEC CEO Wimmer believes that combustion engines will gain importance because of the rise of renewable energies. Combustion engines have shorter reaction times than turbines and can therefore better even out fluctuations in the power grid. 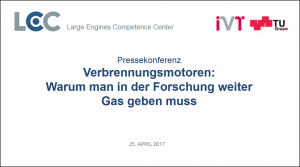