It is not true that women are less interested in technology per se. Many have simply not attempted to break into this still predominantly male field. When the conditions are right, their talents can develop to the full.

Andreas Wimmer in an interview with Der Standard on women in technology:

Mr. Wimmer, most people probably have no idea what the LEC does or what large engines are used for. Women in particular seem to be rather less interested in engine technology.

Wimmer: At the LEC, we deal specifically with engines such as those in combined heat and power plants or in locomotive propulsion systems. Large engines are also used in the marine sector in cruise ships or in cargo ships that can hold up to 20,000 containers. The point is not to invent a completely new engine. By changing individual components, we attempt to achieve better performance while using less fuel and producing fewer emissions. We have test beds in the lab, we are able to conduct simulation and of course we are also concerned with issues of fuel quality and the development of emission limits. Generally speaking I wouldn’t say that women tend to be less interested in technology. Perhaps many women have simply not found the right angle of approach and thus can’t really share my enthusiasm and that of men in general for a career in engineering.

Do you wish that the field of engineering in general and your team at the LEC in particular had more female competence?

Wimmer: Yes, very much so. I find it extremely important to take male and female points of view into account when approaching different technical problems. I know from my experience at the LEC as well as from teaching at Graz University of Technology that this can lead to interesting new aspects that result in great innovative solutions. I would really like more women on my team. A greater percentage of women would also be an asset for technical fields of study at universities and institutions of higher education. Currently they make up only a few percent of mechanical engineering students.

Many women think that when they take up a career in technology, they enter into a male territory in which their competences are not taken advantage of and acknowledged. They are afraid that despite having the same qualifications, they have worse job and career opportunities.

Wimmer: Unfortunately, this may still be true on the open job market. I am personally committed to providing the female employees of the LEC with the support they need to successfully combine having a family and forwarding their career. Positions are filled at the LEC based not on gender but exclusively on professional competence and social intelligence. We also offer entirely individual solutions for working hours and child care.

When did you discover your enthusiasm for technology and for large engines in particular?

Wimmer: I have been a fan of technology since my childhood. It was later that my interest in large engines developed slowly but surely. Today I am very proud of my work and convinced that I have the best job in the world. It is a wonderful feeling when developments from the LEC achieve success on the international stage and are accepted and implemented by industry. For example, we developed the combustion concept for GE Jenbacher’s new J920 engine. It is a powerful gas operated 9.5 MW engine with excellent efficiency. I am equally pleased with the awards and achievements that the LEC and the competence centers preceding it have regularly received over the past 20 years.

Do you have any tips for fathers who would like to get their daughters interested in technology at a young age? Traditionally girls are still more likely to receive a doll than a toy car as a birthday present.

Wimmer: I think that it isn’t possible to instill in children the specific ability that you yourself find wonderful. For example, I have two sons who are not interested in technology – not yet, I hope. I am also convinced that we shouldn’t withhold toys such as cars and trains from girls. If it is just as natural to play with technology as it is to dress up Barbie, there is a real chance that there will be more female students and graduates of technical studies. The job market definitely needs more women engineers and technicians.

The LEC competence center is currently funded for four plus four years. What will happen to your team when the eight years are up?

Wimmer: My employees do not need to worry about that. Many work for us for a previously defined limited period of time while completing their dissertations and use the LEC as a step on the career ladder to a position at the university or on the open job market. People who have worked for us are in high demand on the job market. When the funding period runs out, the center will continue on its own. As our name “LEC Evolutionary Large Engines Technology for the Next Generation of Gas and Dual Fuel Engines” indicates, we are responsible for future generations. 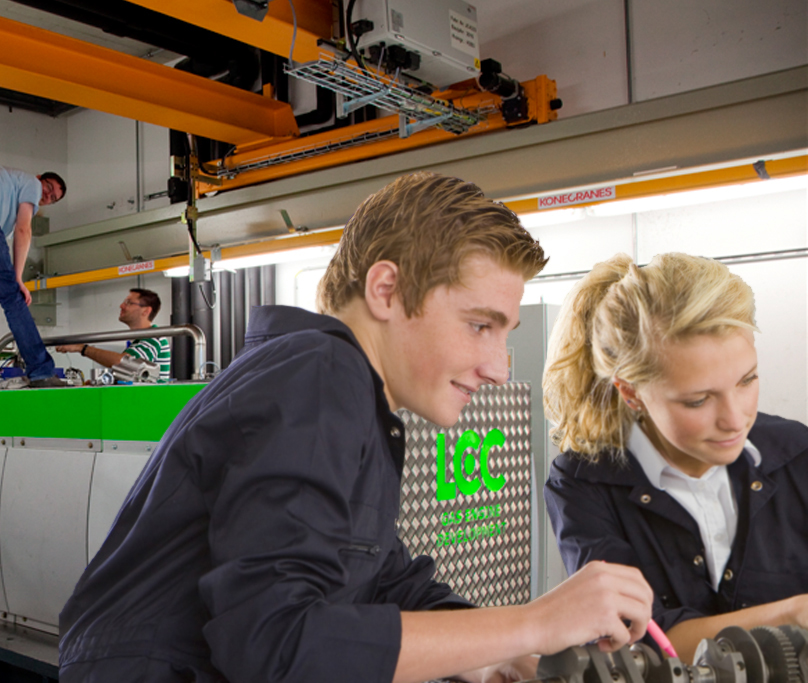